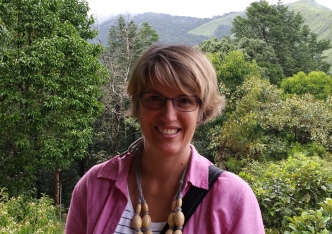 A short Q&A with Dr. Mazzoleni:

Welcome to India! What brings you here? Is this your first visit?

Thanks for the warm welcome. My spouse, Claudio Mazzoleni and I, participated in three scientific activities and did some sightseeing over about 2.5 weeks. First, we participated in a GIAN sponsored workshop. The course was a lot of fun! We managed to have lots of time for informal interactions (tea breaks, lunches, and time before/after sessions) to get to know the students. We visited a local high school for a science symposium with kids. The kids asked lots of questions and seem to be inspired by the event/interaction. Finally, we participated in an International Symposium. These activities were organized by our host, Dr. Ravi Varma of NIT Calicut.

Yes, it was my first visit to India and I can say that the first few days were a bit overwhelming for me because of the culture shock. I knew that Indians drove on the left, but I didn’t know about their driving culture. 🙂 I also was surprised by the obvious lack of public infrastructure (roads, sidewalks, parking areas, drinking water, and other things that I’ve generally taken for granted in the US). Despite this, I saw that Indians are very resilient, humble, and compassionate. I can’t fully describe the emotion that this combination of observations stirs within me, but it’s overall very optimistic.

Can you tell us a little bit about the NIT-Calicut meeting? What was the objective?

The primary objective of both meetings was education/dissemination of research knowledge. The GIAN sponsored course included mainly Ph.D. students with some junior faculty/researchers from nearby and far away places. The International Symposium included several junior faculty and several other senior faculty speakers from other institutions. The actual turnout of expert lecturers was less than originally intended due to insufficient funds for supporting international travel, but several people participated despite this limitation. We had speakers and participants from China, Nepal, Israel, Canada, France, USA, and India.

How was your personal experience vis-a-vis the air quality in India?

The monsoon was fairly intense during my stay in Kerala, so the air quality was very likely much better than usual. However, I observed a lot of high emitters on the road (tucks, auto rickshaws, buses, and other older vehicles). Fortunately, the standard practice of my hosts was to keep the car vent on recirculate, so it wasn’t too bad. I also observed trash burning beside the road and noticed a large smoke plume at some point, which I assumed was from trash burning. Perhaps the bigger surprise was the indoor air quality. I felt uncomfortable in some indoor spaces because of the mold/mildew.

Can you comment on the major research questions related to aerosol physical and chemical properties as it relates to India? Where is the research headed, and what are the major barriers?

This is a tough question to answer because I did notice a disconnect between the ‘state of the science’ in the US and Europe compared to India. The overall lack of measurements and detailed research in India make it hard to know exactly what to do. At first glance, one could say that the problems are similar to earlier problems in the US. But, upon second glance one realizes that the public infrastructure, state/federal laws, and cultural aspects all play important roles. I also thought quite a bit about the impact of anthropogenic emissions in terms of semi-volatile partitioning and secondary processes (gas phase and aqueous phase).

Overall, it seems to me that the most urgent questions pertain to the health effects of the emissions and secondary processes in India. I understood from informal conversations that the cultural practices and a lack of knowledge present unique challenges inhibiting air quality improvement. For example, Dr. Khare mentioned that people in Delhi who receive liquid fuels for cooking would rather sell it than use it. It seems they do not fully appreciate the health impacts associated with the solid fuel cooking practices. This is very difficult for an outsider like me to understand. In another example, a pair of students from Delhi Tech talked about the effect of a recent firecracker ban in Delhi on the air quality during the Diwali festival. The students are just starting and they have some promising insights, but because they haven’t been able to monitor the metals associated with the firecrackers and so they cannot eliminate the co-varying factors that contribute to the air quality during the Diwali. After some casual conversation, I learned that firecrackers are a relatively modern aspect of the ‘festival of light’. Traditionally, oil lamps were used to light up homes, etc. They also expressed concerns about the origin of the firecrackers (being sold despite the ban) and suggested that perhaps the new imported firecrackers contain more hazardous metals than the domestic ones (which are no longer in production due to the ban).

Do you have any advice for the early career researchers interested in working on air pollution in India? 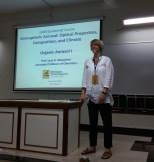 Yes, I have two primary suggestions. First, spend some quality time on public engagement activities. I think that the future of air quality in India depends on the public understanding of its importance. We visited a high school and talked with 50 students, several teachers, and several parents. It was a blast! My only regret is that I didn’t fully understand what I was getting myself into and it takes some practice to talk with young audiences. Second, build a network of colleagues, especially within India, but try to include foreign researchers in your network as well. You’re dealing with some tough and unique challenges that need attention. The network and resulting collaborations will only strengthen your efforts.

On a lighter note, you talked about your first auto-rickshaw ride. How was your experience?

It was bumpy, but a lot of fun! One of the things that I especially found interesting about the rickshaws (and buses) was their custom embellishments. I love that people took the time to decorate these vehicles. They truly add to the charm of India.

View all posts by indiaaq